The Wray Avenue verges were beginning to look a bit untidy with weed growth on the verges after Spring and the late rains and a little bit of litter so Dianne and Molly organised another clean up day.

It was a beautiful morning for it, with the sun shining and people happily greeting us as they walked into town. It was also great to see local, community-minded business owners helping out too – John Douglas from Brown Cow Design and Therese Pitman from Gourmet on Wray. Both of these guys are ever-present at these events and really supportive.

Molly, Diane and June have been doing regular litter pickups recently and it really shows – there was far less mess than usual. But we also felt that this vigilance had led to litter dumping, as the avenue looks tidier and people are more likely to respect it.

For me, I’m really excited that we’re taking ownership of this sliver of public space we have, caring for it and actively connecting with each other through it.

Massive respect to Dianne and Molly for their efforts on this!

After reading my last post, a friend of mine told me that she had been threatened with police action if the chalk drawings her children did on the street of her neighbourhood wasn’t washed off.

I really can’t understand that mentality; I love the acceptance of colour and creativity on the streetscape of Wray Avenue.

It isn’t confined to children either.

When I went down to buy a bottle of wine from the Fremantle Doctor the other night, I saw Robyn from Wild Poppy doing something to the tree next to the cafe. It wasn’t until the next night, after the Fremantle Street Arts Caberet that I saw what she’d been doing.

As my girlfriend and I turned the corner into Wray Avenue, we saw our friends Ian and Sally underneath the tree admiring the knitted wool covering that went right up its trunk. I can’t believe that we’d walked right by it on the way in.

They were amazed by it. Not being from the street, they hadn’t seen the rail that Robyn had covered in crocheting last year.

I managed to get a photo of the tree the next day. 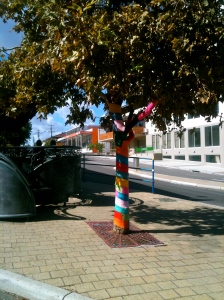 Robyn from Wild Poppy decorated this Tree with guerrilla crocheting

I’ve already noticed it attracting lots of people during the day, with many tourists stopping to take a picture. It’s a wonderful entrance to the street.

I just hope that the planned roundabout that they’re putting in next month isn’t going to mean that this tree, and its colour, get removed; there were rumours of this a while ago, that the tree and the chair would have to go.

There are some people with some grand plans for public artwork in the centre of the roundabout, and equally others with grand opposition to any ideas that I’ve heard put forward.

I for one would love to see something organic, like this tree, that the community can interact with: yarn bombing it up or decorating it on a changing basis.

There’s so much competition for coffee around Wray at the moment. I’m loving it.

My new favourite place is Vanilla Bean. It opened in the old Presto Cafe digs about a year ago. At first I wasn’t taken with it but the convenience of them being open before 6.30am (the only local cafe that does so) when I discover I’m out of milk and/or coffee for my machine at home had me going back.

While not actually on Wray Avenue (it’s on South Terrace), it’s less than 50m from the corner so I’ll claim it as part of the area. Besides, Adam can get his quality take away coffees out so quick I could be back home with them before any of the other vendors had even taken my order.

It’s not the coffee or the speed of service that I like most about Vanilla Bean though, it’s their genuine, neighbourly service. The proprietors are Howardians (a term I’m going to use now for peeps who live of Howard St) and they know the area and the feel of the community.

I can walk in to Vanilla Bean with a head full of sleep and before I even know what I’m going to ask for they’ll be starting on my “usual”. Adam takes the time to build up a personal rapport that I just don’t get from many businesses anywhere these days.

I see it as one of the positives of higher density, inner city living: having local businesses with real local knowledge, where business isn’t just driven by profit motive by by playing an important and responsible role in social cohesion.

More of it please,